Rain first hit the track on Saturday prior to hot laps.  Track crews worked tirelessly over the next three hours to get the surface back into racing condition only to have one more system hit the speedway as the second of five hot lap groups was taking to the track soon after 9:00 p.m.

Zach Blurton bested a field of 45 in Friday night’s preliminary event with J.D. Johnson and Stu Snyder joining him on the podium.

Sunday’s card will include a full slate of heat races, qualifying races and feature events.

Blurton gunned into the lead from the third starting position in the opening pair of corners and then paced the field throughout aboard the J&K Trucking No. 11 Maxim Sprint Car.

The Brinks Truck will arrive with $65,000 dollars in prize money upfront for both nights total. And another possible two grand dished out if Colorado’s Jake Bubak, the 2018-19 Champ can be defeated both nights for the win.
That means, boys and girls, the winner on Friday could take $3,500, with the $1,000 bonus if they beat Jake “Big Stakes” Bubak on Friday, and $8,000 Saturday night by defeating the Arvada racer and winning the title of Belleville 305 Nationals Champ for 2020.

But, that might be easier said than done as Bubak driving the Coyote Candle Maxim #74B has won all four races the first two years of the Nationals.

Included in those totals were two prelim wins that paid $2,500 each and two 305 National wins collecting $7,000 each time for a payout of $19,000 the last two years total at Belleville for the Colorado Gasman.

For the 3rd Annual 305 Nationals, the local Fair Board and Supporters as well as URSS Headman Rick Salem and Dodge City Racing Director Tommie Estes Jr. will all be on board to make this racing weekend one to remember once again while rolling out the Red Carpet for the best drivers in 305 Winged Sprint Cars in 2020.

In 2018, the first annual 305 Nationals took place after the Belleville Midget Nationals were concluded the previous year after a 40 season run. Everyone wondered at that time what was in store for this historic half-mile that had seen the likes of Jeff Gordon, Tony Stewart and Kyle Larson, among others grace and race at this historic speed plant during the midgets reign, while bringing big crowds, big fields, and big money to this sleepy little Kansas town.

Well, all of that has continued and more since the changeover in 2018. Racing with the United Rebel Series, ran by Salem, and with the IMCA RACEsaver 305 Rules, the car counts are bigger, the purse is the richest in 305 Sprint Car Racing, and the crowds have been phenomenal.

In 2020, expect more of the same as around 60 305 Winged Sprint Cars have already entered this prestigious event, with many top drivers on that entry list, and a few others that have also committed to running to make this year’s event on paper the best one yet.

Besides Bubak, there are many contenders to his throne that will be in attendance. Among those are URSS point leader Ty Williams, who will be teaming up at Belleville with 360 Winged Sprint Car Star Matt Covington. 2nd in points Goddard hot shoe J.D. Johnson, a favorite and multiple time winner at Belleville. And, third place in URSS points Kyler Johnson of Quinter, whose father C.J., and grandfather Jon Johnson, all starred at Belleville over the years in open wheel racing hailing from Western Kansas.

Another trio of Stars to battle at Belleville includes Tyler Drueke of Eagle, NE, Zach Blurton of Quinter, KS and Stu Snyder of Lincoln, NE. All have been hot in 305 action in 2020 and have won multiple features while running in the top three in IMCA RACEsaver National points. Last year, Drueke finished second at Belleville to Bubak as well in his #12 Winged Sprint Car.

One of the greatest rivalries over the last few years in 305 racing has been between Bubak and Jason Martin, and that will continue once again at the High Banks. The Kansan, now residing in Nebraska, finished second to Bubak in 2018 and third in 2019 at the Belleville 305 Nationals. A month later, Martin would beat his longtime Nemesis Bubak by winning the 305 Nationals at Eagle, Nebraska, Jason’s biggest win in 2019 and another epic storyline to this rivalry.

But. as the saying goes, “Wait, There’s More”. Top stars entering for the first time at the 305 Nationals include John Carney, racing the Lubbers Wreckers 11x, and Nebraska’s Jack Dover, two of the most decorated drivers in winged sprint car racing over the last several years.

Come to Belleville, Kansas this Friday and Saturday for the 3rd Annual 305 Nationals, a signature event on the Kansas Prairie not to be missed.

Courtesy of The Fans of The High Banks, a bounty has been put on our 2 time and defending champion. The drive that beats Jake Bubak in the A main on Friday July 31st OR Saturday August 1st will receive an extra $1,000. That moves the purse up to $3,500 and $8,000 to win if you can Beat the 74B.
*You have to win the A feature either night to collect the bounty.
This is an organized fun competition, to spark the interest in drivers and fans all around!
Let’s race and have a great time!

Jake Bubak continues to find the Belleville High Banks to his liking.

That was evident with his $2,500 triumph in Friday night’s United Rebel Sprint Series-sanctioned Second Annual Belleville 305 Sprint Car Nationals preliminary atop the lightning-fast half-mile clay oval aboard the Coyote Candle Company No. 74b entry.

Belleville, Kansas – July 4, 2019 – Jake Bubak from Aurora, Colorado took the lead at the start and never looked back to claim the Lucas Oil POWRi United Rebel Sprint Series presented by Mel Hambelton Ford Racing special Independence Day, Thursday night edition of racing atop the famed Belleville High Banks Speedway in Belleville, Kansas.
J.D. Johnson from Wichita and Bubak started on the front row for the twenty-lap feature with Bubak quickly taking the lead as the green flag fell. Johnson, Ty Williams, Jake Martens and Zach Blurton were the top five after the first lap was complete.
Williams and Martens would pass Johnson for second and third, respectively, on lap two as Bubak set sail on the rest of the field. Bubak, aboard the Jeff Stefonick owned #11 sprint based out of Colorado, would cruise the distance to claim his series-leading fourth feature victory of the season. His victory was worth $1000.

The three heat races for the twenty-three-car field were won by J.D. Johnson, Martens and Huish.

The URSS touring regulars will take Friday night off before making their lone 2019 appearance at Thunder Hill Speedway in Mayetta, Kansas for another $1000 to-win event on Saturday night.

July 4th will be an exciting time to be at the High Banks of Belleville, Kansas. There will be 5 classes of cars competing at the historic half-mile. NCRA will have their late models competing on the half-mile and their always exciting mod-lites on the little track. Last year the NCRA brought a strong field of 21 late models. The always fun wild and wacky cruisers will also be on hand running on the small track.

The fifth and final series will be the United Rebel Sprint Series 305 Sprint Cars. The 305’s have become a mainstay on the High Banks. With the July 4th race preceding the 2nd Annual Belleville 305 Nationals, you can expect to see a great field of cars trying to gain laps and experience on the fast half-mile.  JD Johnson won last year’s July 20 lap feature.

Tickets for the July 4th races will not be sold online, but be sure to grab your 305 National tickets online ahead of time by going here.

Jake Bubak left no question about it and the near-capacity crowd enjoyed every moment of it. The Arvada, Colorado hotshot turned in a spotless performance atop the lightning-fast Belleville High Banks on Saturday night to snare the $7,000 winner’s share. 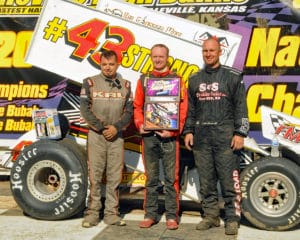 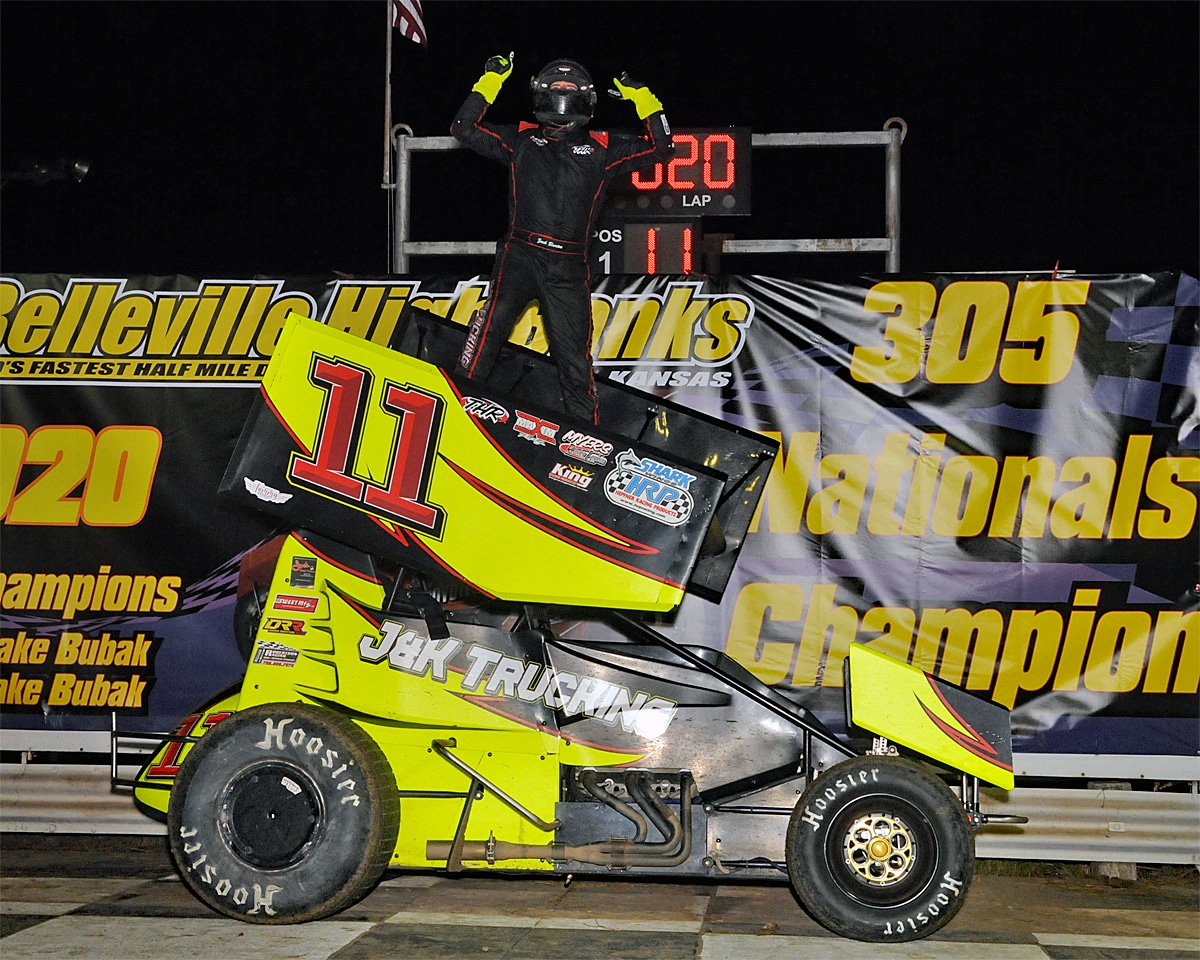