As with most oval tracks in America, Belleville’s began as a horse track, used primarily during the North Central Kansas Fair. In the early 1900’s it became increasingly popular to showcase the new-fangled automobile at these agricultural expositions. So in 1910, Belleville offered its first auto race, scheduled for July 4th.

A crowd of around 7,000-10,000 came out to watch the race which featured three cars. Two were a Model 10 Buick, and one was a Ford. The race was 10 laps (5 miles), and the two Buick’s shot out to an immediate lead over the Ford. From this point on, auto races would continue on at the High Banks, gaining in popularity and car count each year.

The “Nationals” started out as a challenge and turned into the biggest event in the world for Midgets. The Belleville Midget Nationals started at the Belleville 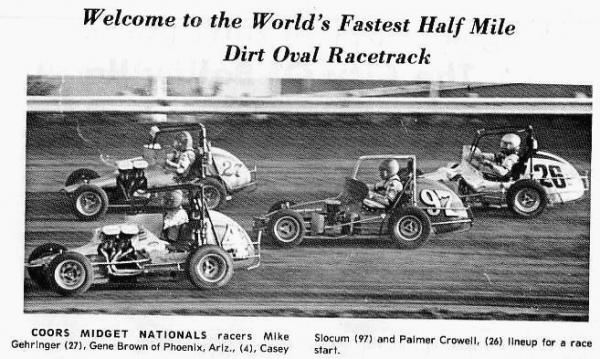 High Banks in Belleville, Kansas, after some racers involved in a 1977 challenge race kicked around the idea among themselves. High interest was shown in the track by the drivers during the Rocky Mountain Midget vs. St. Louis Midget Challenge race. With the interest in the track by the drivers and a lack of a true national race for Midgets, the Belleville Midget Nationals was born when AIMS Promoter Mitch Miller brought it to life by sanctioning the Belleville Midget Nationals in 1978.

The first Belleville Midget Nationals held in 1978 turned out to be the beginning of an event that the Fair Amusements Board had hoped for with big names, fast cars and a lot of action. Some of the big names that were on hand for this premier event were Stan Fox, Larry Patton, Randy Roberts, Casey Slocum, Mike Gregg, Ron ‘Sleepy’ Tripp, Bob Wente, Gary Patterson, Jeff Heywood, Bruce Field and eventual champion, Eddie Jackson. Mitch Miller promoted the Midget Nationals for the first 17 years before USAC came in on the 1996 Midget Nationals. As the nation’s most prestigious event of the year for Midgets, America’s top owners and drivers made the trip to Kansas each year for the historic event. The Belleville Midget Nationals was a one-of-a-kind event that brought the best equipment and best drivers to the nation’s richest Midget race in the country.

However, in 2018 a decision was made to part ways with the Midget Nationals, and start something new…something even bigger and better than before. The Belleville 305 Sprint Nationals were born!

It was the perfect time for transition. We had just finished the 40th Midget National and it was a great tribute to everything that had happened over those years. 40 years which we will never forget. Throughout the years leading up to this decision, the midget car and fan count started to suffer. The midget races just weren’t what they used to be. There was pressure from the higher governing race committees to change the High Banks track, but we were not about to let decades of track history be changed. After all, we ARE the fastest 1/2 mile oval dirt track around! We had to do what was best for the High Banks, so we split ways with the higher sanctioning body. This is when we made the switch to the 305 Sprint Nationals. After the Inaugural 305 National race concluded in 2018, we realized we had hit something big. Car count had tripled, fan count shot through the roof, and everyone began talking about the Belleville High Banks once again!

So what made the difference? Midget’s were essentially unregulated. The cost of motors over the years doubled and tripled, making it unfeasible for many, and thus car count started to diminish. The higher sanctioning body tried pushing us to change the track…but we stuck to our roots.

305 Sprint’s on the other hand are more regulated. Everyone has the same motor size regardless of how much it was purchased for, and the cost of the motors are not anywhere near the cost of a midget motor. The cars weigh more, and the races started returning once again to their roots. The races should be about who the best skilled driver is, instead of who has the most money for a more powerful motor.

Some of the nation’s greatest drivers have tested their nerves at Belleville, including Parnelli Jones, A.J. Foyt, Tony Stewart, Ken Schrader, Stan Fox, Steve Kinser, Sammy Swindell, Scott Bloomquist, Billy Moyer, Kasey Kahne, J.J. Yeley and Jeff Gordon. The race track is BAD FAST, allowing those who can hold onto an opportunity to run “wide open” the entire track! “Man, this is one fast joint,” said Brian Birkhofer, who captured the main event when the World of Outlaws Late Model Series (known as Xtreme DirtCar Series then) played before a standing-room-only crowd on Aug. 28, 2004. “This track is definitely flat out wide open all the way around.”

“I mean everybody who was anybody was at Belleville, and they had their best cars ready to go there. It was a great race for me to win,” said Jeff Gordon after his Belleville Midget Nationals victory on his 19th birthday in 1990. “I was on a tear there, running wide open and jumping the cushion and never lifting. I never stopped racing like that until the checkered flag flew.”Built inside the acclaimed half-mile track is a quarter-mile track which features special events for Dwarf Cars, Mini-Stocks, Hobby Stocks, TQ Midgets, Cruisers and more. The track’s mainstay has been the Belleville Midget Nationals, which have been held every year since 1978. As the nation’s most prestigious event of the year for Midgets, America’s top owners and drivers trek to Kansas each year for the historic event. The Belleville Midget Nationals is an exciting race that brings the best equipment, owners and drivers to the nation’s richest midget race in the country, transforming the town of Belleville from a small rural community of 2,000 to a racing Mecca of more than 20,000 people!

WE KNOW you’ll enjoy your next visit to The World’s Fastest 1/2 Mile Dirt Track!

Even before the High Banks created the 305 Nationals, there were 305 sprint races for the 7 years leading up to the Nationals. Below are the past 305 sprint winners:

305 Sprint History Before the 305 Nationals Were Official